Rio Colorado Lodge, as we know it today began in the 1940’s with the purchase by Mr. and Mrs. Robert Sidney Booker of 10 cabins and several acres along the Red River. The place was only open as a summer destination because the severe weather made it almost impassable in and out of the Red River Valley in the wintertime.

The property was added to in the next couple of decades. New cabins were built and old cabins were remodeled. The trout-stocked lake on the property was popular for fishing and the river, which runs through the property, proved a great spot for fly-fishing. With trout fishing being the main sport in the early 40’s and 50’s, Allie Booker (Mrs. R.S. Booker) ran a curio shop and a fishing tackle shop out of the main 2-story building now known as the lodge. She also operated a street-front café which was later sold but remained open for many years. In the late 1950’s, paved highways were added in and out of the Valley and the first ski lift was built. With the advent of winter sports, the cabins were winterized and Rio Colorado operated year round.

The improving and remodeling of the cabins continues to present day while maintaining their rustic appeal and charm. Rio Colorado is still owned by the direct descendants of R.S. and Allie Booker. 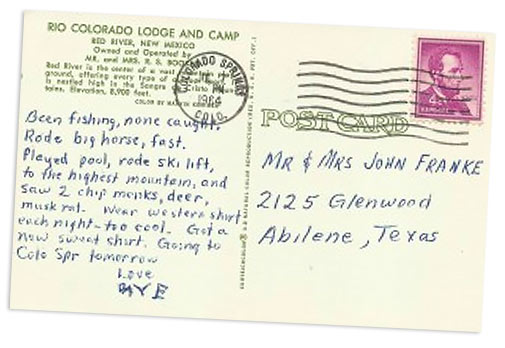 Sid Griggs, grandson of R.S. and Allie Booker is the current president of the Rio Colorado Corporation. He remembers when he was a young boy, that the locals would cut chunks of ice out of the Rio Colorado fishing pond in the winter and store the ice in sawdust in the barn (where our garage stands now).

In the summertime Sid would help his grandpa take ice blocks to the cabins to put in the ice boxes to keep the guests food cold. Beckie Waltz-Veach, manager of the Rio Colorado Lodge from 1973- 1985, as well as great Niece to Allie Booker, loves how the “feel” of the Rio Colorado hasn’t changed after all these years. No matter how much renovating and updates that are done to the property, it still has that homey comfortable feeling that is often hard to find. “It feels like coming home”.

Is Your Cabin Available?

Our cabins can fill up quickly.
Check for openings now.