This year we are celebrating our 75th year in business as the Rio Colorado. Over the years we have gone by several names, Rio Colorado Cabins, Rio Colorado Lodge and Cabins, Rio Colorado Lodge, and most recently, in an order to really get back to our roots and proper branding and offering, we have once again returned to Rio Colorado Cabins. Although the names have changed a little over the years the owners have remained the same since the early 1940’s. Our mission and offering over the years has also remained the same, which is to offer a memorable vacation experience for our guests. This experience may be a little different than that of other resorts and definitely lacks some of the amenities a 5 star resort would offer, but at the end of the day we believe our resort offers people the chance to connect with family, friends and people, share real life experiences, connect with nature, and get away from all the hustle and bustle of their busy lives. So with that in mind, we look forward to celebrating our 75th Anniversary with you, our guests, our friends and our family.  Together we have created something special that, in my opinion, just can’t be found anywhere else. So keep an eye out for some special news, events and maybe even a few giveaways throughout the year!

For those who may be new to Rio Colorado and its history, the property started off with the building that is currently the Owner’s Lodge. It started as a mining cabin and according to the most reliable sources was originally built around 1890. Of course there have been many renovations, remodels and add-ons over the years. The Pratt family owned what was referred to as the P 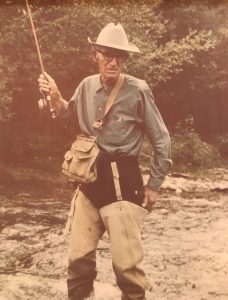 ratt Family Farm and Cabins and built cabin 15, the 1.5 story cabin on Main Street, sometime around 1910. The Pratts sold the property to Robert Sidney Booker (pictured right) and his wife Allie Booker in May of 1944. Sidney had recently discovered Red River during his travels for work and was looking for something to invest in. He was able to scrape together enough money to purchase (or put a down payment) on the property. The details are a little vague. Sidney loved the mountains and especially liked to fish so Red River was a great place for them to spend the summer. Sidney would spend a lot of his time taking guests on fishing trips leaving his wife Allie to manage a lot of the day to day duties at the lodge. Several of their children and grandchildren would also come up to help with some of the lodge chores during the summer. 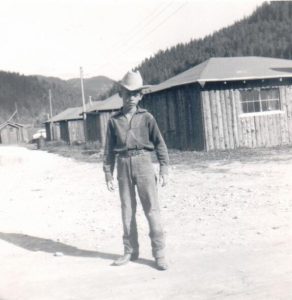 Current President of Rio Colorado Corporation and grandson of Sidney and Allie Booker, Sid Griggs (pictured on the left in 1952 by cabins 10, 9, 8, and 7) has many memories of the Rio Colorado in its early days. Sid’s father CJ was married to one of the Booker’s daughters, Fay. Upon his return from the war, he had some money to invest. He purchased a couple lots from the Bookers and built cabins 18 and 19, and they also owned cabins 12 and 13 (no longer on the property). It was also their responsibility to furnish the cabins. Sid remembers coming up every summer with a car and trailer full of furniture, and other odds and ends for the cabins, which must have been pretty scary in those days coming down the old pass. Sid also remembers helping his grandparents around the lodge by picking up trash and delivering firewood and ice chunks that were cut from the pond during the winter and stored in sawdust in the barn for the cabins that had ice boxes. (Pictured below – cabins 18 and 19 July 1954) 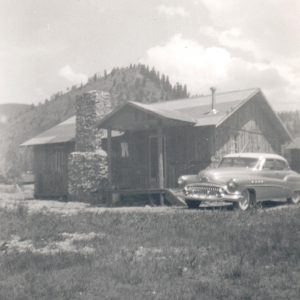 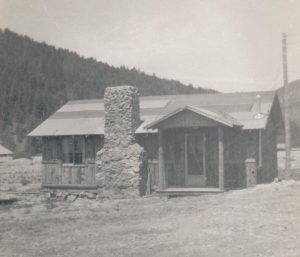 Other family members including the Booker’s son Don and son-in-law Bill Tinney also used some of their money to invest and build more cabins on the property.  After years of running the lodge this way it was time to make some changes, so the Bookers decided to incorporate the business in December of 1968. This change started a new era of the business. Sidney and Allie Booker were the first stockholders and the children were the first corporate officers. Don, the oldest son, was the first president of the corporation. Eileen, the oldest daughter, was the secretary, Bob, the youngest son, was the vice president and Fay, the youngest daughter, served as a board member. These changes came at a good time for the Corporation because Sidney died a few years later in the early 1970’s leaving behind his wife Allie and his children to carry on his legacy at the Rio Colorado.