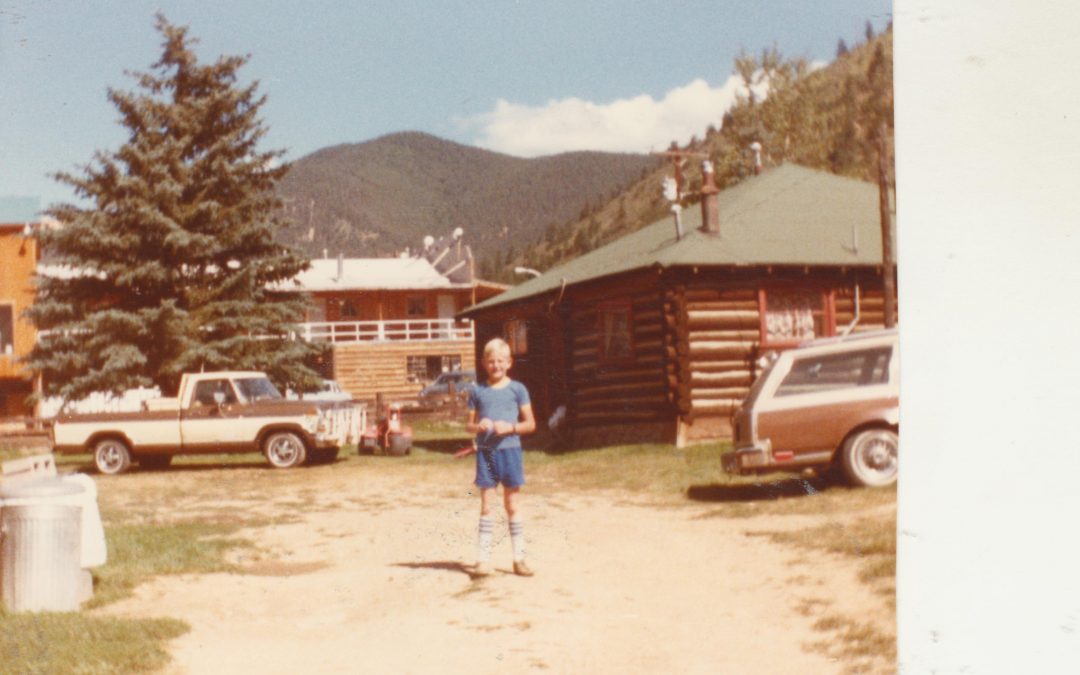 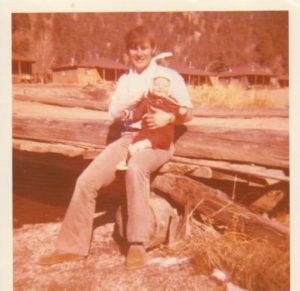 In 1973, Steve and Beckie Waltz (my parents) were hired to be the first full time, year round on-site managers. I had just been born in May that year at Saint Joseph’s Hospital in Albuquerque.My parents had both lived in Red River for several years prior and had recently graduated from Questa High School. For the first 4-5 years of my life we lived in the Owner’s Lodge which also held the office until the Current Manager’s House and office was built in 1977. Growing up here at the Rio Colorado was a great experience for me. I spent most of my free time skiing, sledding, fishing, riding my bike around town, playing and hiking in the mountains, and playing with my friends and guests at the Lodge during the summer. Later in my childhood I would help my dad mow grass, stock firewood and pick up trash. 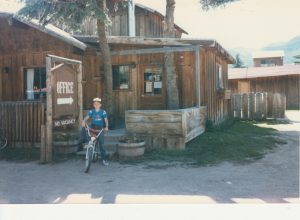 Brian and his bike in front of the office

The Rio Colorado grew and changed quite a bit during this time. Many of the older cabins, and buildings like the old café and Assayer’s office were torn down or sold and relocated off the property. This made way for some more modern cabins. Cabins 24 and 25 were built off site in Lubbock Texas, and delivered to Rio Colorado where they were put on foundations and hooked up to the utilities. Cabins 5 was built in Raton. There were some challenges with the design, mostly the plumbing, I guess Texas and Raton builders just aren’t used to plumbing for the long cold winters here in the Mountains of Red River. Most of the plumbing had to be removed and relocated to prevent freezing.  Cabins 6 was the next cabin to be built but this time the construction crew came to us out of Albuquerque. While the overall construction did go better, it wasn’t until after finishing the framing that they realized the staircase was running partly outside the cabin and would need to be moved. After these construction challenges, a local construction crew was hired to build 14, and finally had one building go according to plan. Those were some of the challenges of a small town and a growing business. In addition to the cabins a new workshop and garage were built and even some of the lumber from the old Assayer’s building was used in the construction. 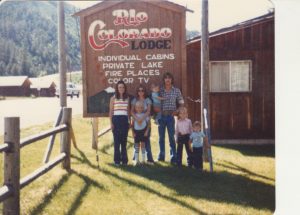 My mom Beckie, aunt Laura, uncle Marty, cousins Janet and Kevin, my sister Leslie and myself posing by our brand new sign!

It was really during this time that our regular business was growing too. Many of the people who came to stay with us, especially during the summer, were turning into repeat customers. Many guests had their favorite cabin or weeks they would like to come and would reserve their dates for the following year before leaving. I remember some of those folks even now. Some became friends of the family and we would look forward to having cookouts, fish frys, fishing, hiking and playing together and hanging out around town during their visits. 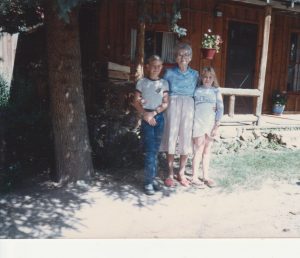 Allie Booker was still heavily involved in the business and would spend a good portion of her summer in Red River. She would typically come up in May, usually bringing furniture, dishes, pots and pans and other cabin accessories with her to stock the cabins during spring cleaning. Most of the other family members, children, grandchildren and great-grandchildren, would take their vacations and visit through the summer months as well. Along with the changing business, came changes in the organization as well. Bob Booker (Sidney and Allie’s youngest son) took over as President of the corporation while others stepped up and helped in various roles and board positions.

Despite a brief attempt to sell the property and business in the mid 80’s, things were going well at the Rio Colorado, business was increasing and more and more people were coming to spend their summer vacations at the Rio Colorado. Winters were always a little bit slower than the summer and brought its own set of challenges, but along with these challenges came more opportunities as more of the smaller lodges and cabins sold out and were developed into homes, communities, or condos. I feel that Rio Colorado has continued to fill that niche over the years that a lot of people are looking for. A place that may be a bit more rustic, may lack some of the fancy amenities of a 5 star resort, but allows a family to create memories, get away from the hustle and bustle of the big city life and get back to nature in a fun atmosphere.

In 1985, the Waltz family decided to move to Colorado. My mom, sister and I moved to Colorado Springs in the fall so we could start school while my Dad stayed through the winter to train the new managers. We would still return some weekends to visit. Although I would go on to spend the next 19 years in Colorado, Red river was always close to my heart and not very far from my mind. 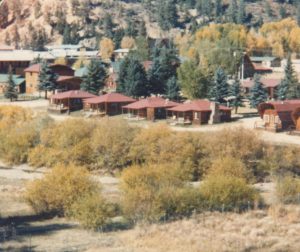